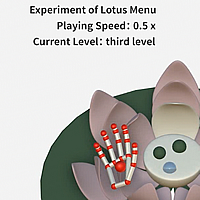 Three-dimensional rotation, including pitching, yawing and rolling, is an important gesture in 3D interaction, with the potential to extend the selection capability in large screen interaction system. For 3D rotation interaction, researchers indicated the design space of pen tilt and wrist tilt as input modality. However, the combination of freehand 3D rotation gesture has not been fully utilized for menu control. In this article, we present a 3D LotusMenu based on the metaphor of Chinese traditional symbol lotus. This menu is controlled by three-dimensional rotation of user's wrist and elbow.