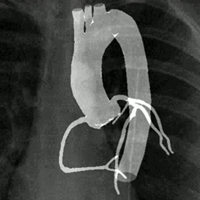 Simulators play an important role in minimally invasive vascular surgery training. A challenging task for the simulator is to model an elastic guidewire and an elastic vascular system, both of which are important aspects for vascular surgery. However, many simulators treat the virtual vascular system as a rigid object, which reduces the immersion of operators. In this study, a virtual guidewire is first modeled based on Cosserat rod theory. Second, the stretching and bending constraints are introduced into the mass-spring vascular model according to the conservation of linear and angular momentum, making the model more stable and the deformation of blood vessels more realistic. Furthermore, the traditional dihedral angle constraint is replaced by our new bending constraint, which simplifies the complexity of the calculation. Finally, some experiments are conducted to demonstrate the effectiveness and accuracy of our vascular and guidewire models.