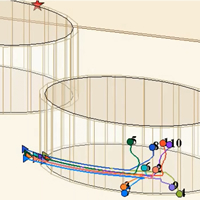 An unmanned aerial vehicle (UAV) swarm system outperforms a single UAV in terms of performance, reliability, adaptability, and economy by concentrating resources and utilizing complementing advantages. For example, by flexibly configuring single-plane loads such as reconnaissance detection, electronic jamming, and fire strikes in the swarm, real-time reconnaissance and strikes on weak parts of key targets will be carried out. According to a theoretical and empirical study on the autonomous coordinated flocking of the UAV swarm system, the distributed decision-making problem is expected to be solved. Researchers of bird flock behaviors have been concerned about such a problem for a long time. The mechanism observed in bird flocks inspires the design of UAV-flocking control methods. However, the abovementioned methods apply only to homogeneous groups or groups with a single leader and cannot be applied to the UAV flocking control problem under multiple dominant individual conditions. To solve this problem, this study proposes the application of a UAV flocking control algorithm to a heterogeneous swarm with multiple dominant individuals by studying the mechanism of the collective motion of pigeon flocks. Collective motion is the group behavior of birds, mammals, fishes, insects, and other social organisms that, after long-term evolution, are adapted according to the living environment. Researchers favor pigeons to study collective motion because of their ease of breeding and observation. Individuals follow simple local interaction rules to form a highly ordered collective motion in the homing flight of a pigeon flock with multiple dominant individuals and swarm intelligence emerges at the group level. When flying along a smooth trajectory, individuals tend to follow the average flight direction of their neighbors. When suddenly turning, they will tend to follow their leader. Although qualitative analysis makes the pigeon swarm intelligence mechanism gradually comprehensive, obstacles are encountered when investigating the simple rules behind pigeon flocks' orderly movement owing to the lack of a clear description of interaction patterns and switching relationships.