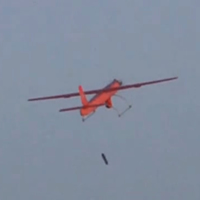 In order to increase the lift force of the unmanned aerial vehicles (UAV) in plateau areas, the UAV is commonly equipped with high span chord ratio wings. However, it may decrease the maneuverability of the aircraft, and thus increasing the risk of flight in complex terrain regions. Thrust vector control is a direct force flight control technique, which enhances the maneuverability and introduces the residual of the flight control system. In this paper, we develop a novel variable thrust direction mechanism, which provides the normal propeller UAV with the capability of directional force control. We propose a combinational flight control strategy for the newly developed UAV. Simulations and real flight test demonstrate the performance of the proposed technique in increasing the maneuverability of the conventional propeller UAV.